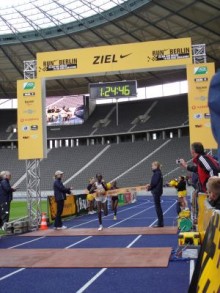 For the first time since 1990 the traditional Berlin race has a five figure number of participants on Sunday. It is organised by the Berlin Athletics Federation. While there are a number of events most of the athletes will run the 25 k race and once more world class performances can be expected. For the Kenyans it could get hard to continue their win streaks. Five times in a row the winner of the 25 k of Berlin came from Kenya.

Fierce competition will come from Kedir Burka. He is one of four Ethiopians running on Sunday. So far no Ethiopian was able to win the 25 k of Berlin – in the men’s race they have not even achieved a place in the top three in the last 25 editions. Kedir Burka is internationally unknown but is said to have shown some promising potential in Ethiopia. Elijah Sang is among the favourites from Kenyan. He has shown last weekend that he is in fine form, when he placed second at a 10 k race in Würzburg. Clocking 28:10 he was narrowly beaten. Ben Kimwole is another Kenyan to watch on Sunday. He placed third in Würzburg with 28:12 and had been third as well earlier in the season at the City Pier City half marathon, clocking 61:34 minutes.

In the women’s race a runner comes to Berlin who is trying to accomplish a unique success in the history of the 25 k of Berlin. Magdaline Chemjor already won the race twice. The Kenyan triumphed in 2001 and 2002. No woman ever before has achieved a third victory at the 25 k of Berlin. After giving birth last year Magdaline Chemjor came back to road racing this season.