Paul Tergat: “I wish my Berlin record could stay forever – I am sure I will come back to Berlin one day” 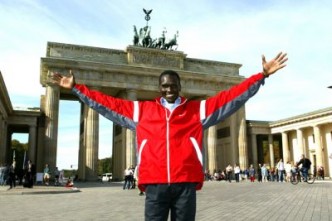 What is next on your agenda, after not being able to run at the Flora London Marathon?

Paul Tergat: “I am very disappointed and sad that I was not able to run in London. It was a great race in which Felix Limo and Martin Lel showed a good fight at the end. I have to look in the future and I know that I will run a marathon at the end of the year. It will be a fall marathon. Before that I want to run one or two 10 k races, but I don’t know yet where or when.”

London was the second race of the new World Marathon Majors Series. What do you think about it?

Paul Tergat: “It’s a great idea. Many of us never have the opportunity to compete at big championships. Now we can collect points for a jackpot, and everybody knows that it is competition we marathoners want to have. That definitely needs to be supported. The interest about marathon is now at a higher level. The five races of the World Marathon Majors are doing a great job so far.”

How long do you think your world record will last?

Paul Tergat: “I wish it could stay forever. But records are meant to be broken, although I have not a clue when it could happen in this case.”

What memories do you have of the real,- BERLIN-MARATHON?

Paul Tergat: “It is my city. It is my race. I have memories about Berlin I will never forget. It is where I set the marathon world record in 2003. The course is very fast and the crowd is great. I am sure I will come back some day.”