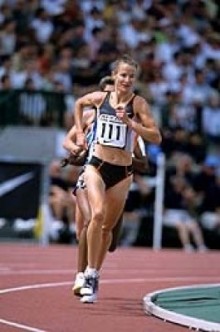 Sonia O'Sullivan currently recovering from a hamstring injury hasn't definitely ruled out making a fifth successive appearance at this summer's European Championships in Gothenburg. The 36-year-old Irishwoman is eager to return to the Swedish venue where she made her global breakthrough on the track when winning the IAAF World Championships 5000 metres gold medal 11-years ago. O'Sullivan because of her recent injury setback, was forced out of last month's Commonwealth Games where she was scheduled to make her appearance over 5000m for Australia, for whom she holds dual nationality.

The former Olympic 5000m silver medallist admits the three months hamstring problem has been more troublesome than she expected, but feels with the right treatment - and a little bit of luck - she might be fit for August's championships. "I'm not sure at the moment, but if I can get myself fitter and do a few more races, I might make it," said O'Sullivan after joining fun runners in Sunday's Great BUPA Ireland Run in Dublin.

"I need to be patient"