Haile Gebrselassie after his WMM flop in London: "The worst race in my career“ 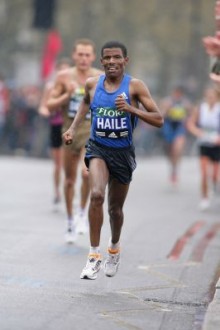 "I am still a beginner"

Never before had Haile Gebrselassie been so far away from a world record as in Sunday’s Flora London Marathon, which was won by Kenyan Felix Limo in 2:06:39 hours and American Deena Kastor in 2:19:36. He missed Paul Tergat’s world record of 2:04:55, set in Berlin 2003, by 4:10 minutes – in a hypothetical duel he would have been almost 1.5 k behind his archrival. Despite this letdown Haile Gebrselassie won’t give up. „I am still a beginner in the marathon, London was only my third marathon race,“ said Haile Gebrselassie, who finished third in London 2002 in 2:06:35, then won in Amsterdam in 2:06:20 last October and now finished ninth. As a youngster he had once run a marathon in 2:48 hours.

„I was prepared very well and I had run world record paces in training. But this is sport – those things can happen,“ said Haile Gebrselassie. „The problem was the rain. When I watched outside the window in the morning, I already had a bad feeling. The streets were slippery and I thought I’ll loose my balance. Already after 5 k it was getting hard. I did not even expect that I would manage to finish,“ said Haile Gebrselassie and added about the moment when his opponents broke away in the last stage of the race: „That wasn’t Haile Gebrselassie running the last five k!” As a pure forefoot runner, who doesn’t role over the pad in a stride, Haile Gebrselassie may have principle problems in the marathon.

"I will run a marathon in September, October or November"

Despite of his flop in London Haile Gebrselassie will give it another try in a fall marathon. „I will run another marathon either in September, October or November“, the Ethiopian said. It is possible that he will run on the fast courses in Berlin or Chicago. Both races form together with Boston, London and New York the new World Marathon Majors Series (WMM). The man and woman who will collect most points in a two year cycle will share a one million US-Dollar jackpot. On the top of the leader board prior to the fall marathons are Boston and London winners Robert Cheruiyot and Felix Limo as well as Rita Jeptoo and Deena Kastor. London was a wash out for Haile Gebrselassie, because WMM points are handed only to the first five finishers.