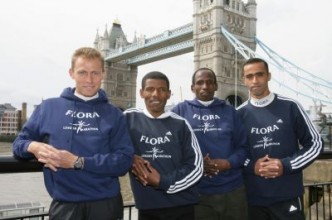 The elite athletes are running for a total prize money of 300,000 US-Dollar. 55,000 US-Dollar earns the winner. More bonuses for fast times are available. The one who will break the world record on Sunday will get 175,000 US-Dollar. The one for such an achievement in London is of course Haile Gebrselassie. The 33 year-old has collected 20 world records so far in his outstanding career. On the track he dominated for years on the long distances and was two times Olympic Champion and four times World Champion at 10,000m.

„I know that I can break the marathon world record, but I don’t know when,“ said Haile Gebrselassie, after he had missed Tergat’s record at the Amsterdam marathon last October, although clocking a very fast 2:06:20 hours. But prior to the London Marathon, the Ethiopian plays down expectations. He already broke two world records during the past months in the half marathon (58:55 minutes) and at 25 k (1:11:37 hours). „If you are talking about a marathon world record, everybody has to know that it is not enough to be in good shape. Everything has to be perfect. The weather, the course and the temperatures are important as well. Everything has to fit perfectly.“ Haile Gebrselassie expects a tactical race. “In 2002 I ended up being the pace maker for almost 40 k and then finished third,” said Gebrselassie. “That won’t happen this time.”