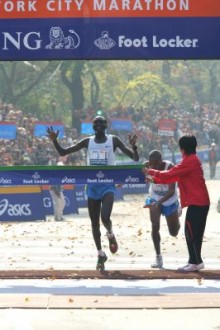 World record holder Paul Tergat has expressed massive disappointment after being forced out of this weekend's Flora London Marathon with a calf injury. The 36-year-old Kenyan who would have been making his fifth appearance at the event, picked up the problem in his left leg six days ago training back home. "I'm so disappointed this was my race," said Tergat who set his world record of 2:04:55 hours in Berlin two-and-half years ago.