Nirmala Bharti broke records at the Vattenfall BERLIN HALF MARATHON 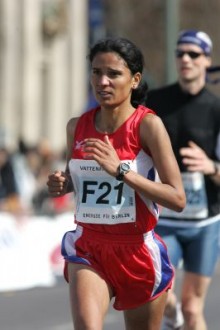 Nirmala Bharti comes from Nepal – a country with one of the poorest economies in the world. She belongs to the sports promotion group of the Nepalese police. The 29 year-old is reckoned as one of the best female runners in Nepal and set a new Nepalese record at the 26th Vattenfall BERLIN HALF MARATHON in 1:18:46 hours. She finished sixth in an international field.

Bharti was helped by funds from a German foreign aid project. With the money her coach Sushil Nar Singh Ran is paid. He prepared Nirmala Bharti for her record race. „I got international experience here which I had not have before“, said Nirmala Bharti after her triumph at the 21,0975 k distance. But she did not set just one new national record in Berlin.

On the course judges were positioned at four more points. At all of these points she clocked a new Nepalese record (times subject to ratification). Her record series started at 12 kilometres, which Nirmala Bharti passed in 44:45 minutes. She reached 15 km in 56:06 minutes and 10 miles in 60:10. Nirmala Bharti passed 20 k in 1:14:52 hours before finishing four minutes later.

„The weather and the course were perfect,“ Bharti said. She probably is used to completely  different conditions. One year ago she set a national record in Kathmandu in adverse conditions. The city is in high altitude and it is polluted. Additionally the course was not closed for traffic during the race.

„It was really nice here. Right from beginning I only aimed at setting a new national record,” said a happy Nirmala Bharti after the Vattenfall BERLIN HALF MARATHON. „I am happy that I ran that well. The spectators were superb and motivated me.“