One German Road Races founding member is celebrating a grand anniversary on Easter Saturday—Numerous world-class runners have participated in the Paderborn event. 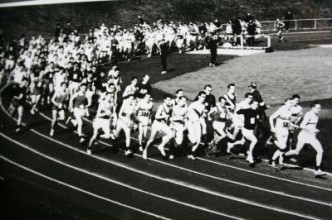 The Paderborn Easter Run is turning sixty on Easter Saturday.
In 1947, the first running event after World War II was both traditional and modern. The race started out as a 3.35 km “Run around Paderborn.
” Now the courses include the standard international ones of 10k and the half marathon distance of 21.0975 km, as well as a few shorter distances for enthusiastic youngsters and beginners.

While at the beginning it was hardly more than a dozen runners who took the challenge,  Horst and Sascha Wiczynski, who together are leading the organisation of the anniversary event, now have watched 7000 registrations be entered into the event computer.  “If we have good weather, we could beat the record number of 7,230,” the go-getters at the sport club SC Grün-Weiß Paderborn agree.
Those are impressive numbers for Germany’s oldest road race, which year after year has successfully managed the balancing act between professional athletes and those running just for fun.

Just two years after the first starting shot, Hans-Werner von der Planitz, a marathon runner from Berlin and later head trainer for the German national marathoners, convinced the organisers to extend the race, making it a five-lap event with a non-traditional distance of 16.75 km. In 1961, the basis was laid for the legendary “25 km of Paderborn,” and the course was ‘officially’ measured so that the times could qualify for the national and international lists of best times.

The list of champions includes such prominent names likes Manfred Steffny, Anthony Moore, Wolf-Dieter Poschmann, Edmundo Warnke, Karl Fleschen, Hugh Jones and Michael Spöttel. In 1977, the first 25 km German Championships were conducted by the sport club SC Grün-Weiß Paderborn within the framework of the Easter Run.
The German-Chilean Edmundo Warnke presented an excellent winning time of 1:14:20h that has only been beaten once: Hugh Jones of Britain (the winner of the London Marathon in 1982, who is now the General Secretary of AIMS) was two seconds faster. These are two absolute world-class times that even today are reached by only a few of the world’s elite.

When long distance running was opened to women, top international female athletes also came to Paderborn and repeatedly made the headlines.  The first important milestone was set by Dorthe Rasmussen of Denmark in 1983 with a time of 1:25:23h. At the 40th anniversary event, the world record holder Grete Waitz (nine-time winner of the New York City Marathon) captivated the growing group of runners at the ‘Pader’ with a truly remarkable world best time of 1:22:28h.
There was also a record number of participants: 2,435 athletes from nine countries.  In this concert of elite runners, renowned German runners like Charlotte Teske and Christa Vahlensieck of course could be seen, as well.

The 10K race and the half marathon

Over the course of the 1990s, the 10K Carl Diem Memorial Run that was originally planned as a people’s run moved more and more into the focus of the elite athletes, and it established itself as an absolute equal to the half distance marathon, which was replacing other long distance events as part of international regularisation. Carsten Eich, Stephané Franke, Tendai Chimusasa, Tegla Loroupe, Joyce Chepchumba, Katrin Dörre-Heinig and Kathrin Weßel attracted attention year after year, helping the Paderborn Easter Run to gain in popularity together with its diverse collection of events (from Fun Run, to inline races, to kids’ races) — which culminated in last year’s record number of 7,240 participants.

“We are not only proud of our group of faithful runners, but also of our sponsors and partners, and especially of our 300 volunteers who enthusiastically support our 25-member organisational team year after year on Easter Saturday,” the president of SC Grün-Weiß, Horst Wiczynski, comments on event that decade after decade is exemplary in the German and international running scene.

Further information on the 60th  Paderborn Easter Run is available online at www.paderborner-osterlauf.de.