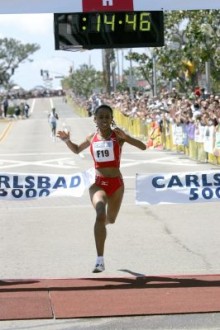 Meseret Defar, who finished second last year at the 5,000 m World Championships was beaten by her countrywoman Tirunesh Dibaba, ran right from the start her own pace and set a new world record. She bettered the old best time of Tirunesh Dibaba and Paula Radcliffe (Great Britain), who both ran 14:51 minutes, by five seconds. Isabella Ochichi (Kenya) finished second in a very good time of 14:53. The Ethiopian Ejigu Sentayehu came in third in 15:17. "I did not go to the World Cross Country Championships last week because I wanted to break the world record here in Carlsbad," said Meseret Defar.