My goal is to run fast, then to go to London after Berlin 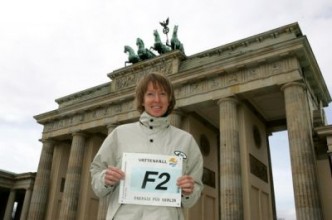 Deena Kastor in front of the Brandenburg Gate in Berlin.
© Victah Sailer

Her bronze medal was a further reminder of the great days of Joan Benoit-Samuelson. In 1984 she became the first women’s champion in Olympic marathon history. Since that time America had experienced several running booms but they’d not had an Olympic medallist in the marathon. That made the clamour around Kastor all the greater. A year later she won the LaSalle Bank Marathon in Chicago, missing her own US record by just nine seconds with 2:21:25. Before Chicago she set a national record in Philadelphia for the half-marathon with 1:07:53 on September 19, 2005.

She was in relaxed mood when she met the press shortly after flying in from Newark, New Jersey on Friday morning. Though she has used training bases in Darmstadt, near Frankfurt, when preparing for European track races, this was her first time in Berlin.

In preparation for these twin targets, Kastor’s training has undergone some changes but she remains confident : “ I’m in good shape. We’ve changed a few things in training this year and have been in the San Francisco Bay area, away from our home in Mammoth Lakes in California. That’s at 8,000 ft (2,500m) altitude and there’s a lot of snow there. My coach Terrence Mahon wanted to refresh our training schedules this year. I’ve been focusing more on quality whereas previously I would be doing 120-mile weeks, but now am focusing on tempo runs that are close to race situations and I’m ready for this.This is my favourite distance. I’m excited to be resting up for this.”

The Berlin course record is held by Kenya’s Joyce Chepchumba with 1:08:22, set in 2000. Clearly that will be under threat, as will Kastor’s own national record of 1:07:53 from last year : “I’m hoping to run 1:07. But I’m making a conscious effort not to focus on time. Last year in Chicago I disintegrated at 8 km when Andrew (husband and physical therapist) shouted to me : “You’re on world record pace!” So the focus is not to be obsessed about times.”

Deena Kastor may well like to contemplate two further statistics : the world best this year is 1:07:26, set by the Japanese Kayoko Fukushi in Marugame, Japan on February 5, while the official world record remains the property of the now retired Elana Meyer of South Africa with1:06:44, achieved in Tokyo in 1999.