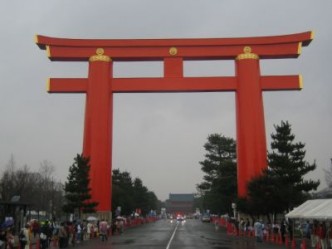 The city emblem of Kyoto – the red gate at the start and finish of the Kyoto Half Marathon. Just barely visible in the background, the Heian Shrine.
© hme

The traditional half marathon race in the old Japanese imperial city is known as a fast race. On March 19, 1995, Uta Pippig (SCC Berlin) set the German record for the half marathon there with a time of 67:58. In the past, many other international stars have participated, but this year foreign runners were lacking completely, and the Japanese runners were on their own.

Kyoto has many attractions — no wonder, as it was the capital of Japan until 1868. Then the emperor moved to Tokyo, and Kyoto lost this function. Now each year over 30 million tourists come to Kyoto to admire the palaces and magnificent temples and gardens.
Not unimportant for runners, Kyoto is close to Osaka, the host city for the IAAF World Championships next year.

AIMS, the Association of International Marathon and Road Races, chose Kyoto as the venue for a meeting of its board of directors. There the members of the board got to experience the exemplary organisation of the event.

Almost 3,000 people helped out, including 580 police forces, to make sure that the runners made it safely through the city.

The start and finish of the Kyoto Half Marathon are set on a grand boulevard of the city, between the Heian Shrine and the great red gate. This streets hosts several museums and public buildings. The participants were able to change and store their belongings in the museums.
Almost 6,000 participants registered for the half marathon, even though the qualifying time was two hours. This limit was also carried out consequently by the police, and the streets were not only empty at two hours and five minutes, but they were also opened up to traffic shortly thereafter.
It rained before the start, and after the last participant crossed the finish it began to rain again—the organisers must have made a pact with the weather gods.

The winner, Takayuki, finished with an excellent time of 1:02:50, followed in second-tact  by other runners. The women’s winner, Mai Itoh, was back a little with a time of 1:11:11.
The super quality of the race can be seen in the list of the top ten men, who all finished under 1:03:22—and even better: 122 men beat the time of 1:10:00.
At the 25th Bewag BERLIN HALF MARATHON last year there were only 26 runners who beat the magical time of 1:10:00.
Worth of mention—the runners were greeted by geishas at the finish.

There were other high-class races in Japan taking place this past weekend, as well:
At the International Nagoya Women’s Marathon, Harumi Hiroyama won in 2:23:26, at the same time beating the winner of the 31st real,- BERLIN-MARATHON in 2004, Yoko Shibui, with a time of 2:23:58. Shibui started out looking like she might set a new record, but she had to slow down the tempo on the last 10 kilometres and was then passed.

Mizuki Noguchi, the Olympic champion in Athens in 2004 and winner of the 32nd real,- BERLIN MARATHON in 2005, won the Corporate Half Marathon of Yamaguchi in 1:08:49, her second-best time after she recently improved her personal best on February 5th at the Marugame Half Marathon with a time of 1:07:43.

Naoko Takahashi, Olympic champion in Sydney in 2000 and winner of the real,- BERLIN- MARATHON in 2001 and 2002 announced that she was not going to participate in the Asia Games in Doha in December of 2006, but instead would run at the World Championships in Osaka in 2007 and then end her career in Peking in 2008.
Through her victory in Tokyo last November, she had finally achieved the nomination.