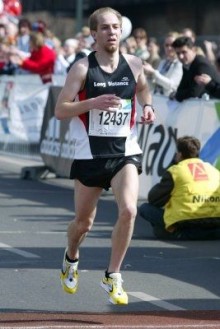 On Sunday the 26th Vattenfall BERLIN HALF MARATHON will be started with a new participation record and an international elite field. While there were 18,331 athletes in last year’s edition, there will be an expected figure of around 20,000 this year. With that the Vattenfall BERLIN HALF MARATHON is the seventh biggest race of its kind in the world. Among the total number are runners as well as walker, wheelchair athletes, hand biker and inline skater. Furthermore the participants of the 3.5 k Vattenfall FUN-RUN, the Kids Race and the Skating Kids Cup are among that total number. For the first time the Vattenfall Berlin Nordic City Walk will be staged on a 6.8 k course.

Best elite field in its history - with Deena Kastor

The Vattenfall BERLIN HALF MARATHON will feature the best elite field in its history. The most spectacular commitment is that of US marathon star Deena Kastor. She will use the 26th Vattenfall BERLIN HALF MARATHON as a dress rehearsal for her start at the Flora London Marathon. The 33 year old had won the bronze medal in extremely hot conditions at the Olympic marathon in Athens in 2004. Last year the US marathon record holder (2:21:16 hours) bettered the national half marathon record as well. With her personal best of 67:53 minutes Deena Kastor has exactly the identical time as the second top runner at the Vattenfall BERLIN HALF MARATHON: Edith Masai. The Kenyan won the Gold medal at the World Cross Country Championships three times in a row (2002 - 2004).
Kastor and Masai are both able to better the current course record of 68:22 minutes.

But there is also a German runner with very good chances at the Vattenfall BERLIN HALF MARATHON – which will be impossible in the men’s race. Luminta Zaituc is the defending champion. The 37 year-old won in 71:04minutes in 2005. Her goal is a time of sub 70 minutes and she will try to improve her personal best of 69:35. „I am happy that I can compete again in Berlin,“ said Luminita Zaituc, who additionally finished second in last year’s real,- BERLIN-MARATHON.

Paul Kosgei with 59:58 fastest time in the field

There will be a world record holder in Berlin, who is not unknown here: Paul Kosgei won the ,25 km of Berlin’ in the world record time of 1:12:45 hours in 2004. Recently the Ethiopian Haile Gebrselassie ran faster but there are doubts if the record will be ratified. 27 year-old Kosgei has the fastest half marathon time in the field as well. In Newcastle he won in 59:58 minutes in 2002. In the same year he was World Half Marathon Champion.

If Paul Kosgei is in his best shape, the course record could be in danger. Since 2001 the Spaniard Fabián Roncero holds it with 59:52 minutes. Another Kenyan favourite is Joseph Ngolepus. The 30 year-old Kenyan has a personal best of 60:56 minutes and was runner up last year. 2001 he was the surprise winner of the real,- BERLIN-MARATHON. Currently in good shape is another Kenyan: Evans Cheruiyot finished second at the half marathon in Ostia (Rome) in 60:12 minutes a month ago. .

FIGURES AND DATES FOR THE 26th Vattenfall BERLIN HALF MARATHON
as of Monday, 27th March 2006

STATS OF THE RUNNERS:
1.708 runners come from 67 nations (non Germans)

The development of the Vattenfall BERLIN HALFMARATHON since 1999:

The figures include FUN-RUN and Kids Race.