Dr. Dave Martin: I cannot imagine why a Federation like Germany would not advantage of nearby good quality competition and send full teams. 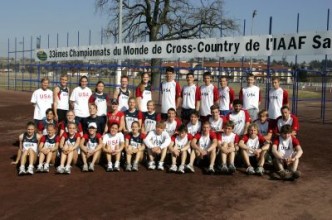 On April 1 + 2, 2006, the IAAF Cross-Country World Championships will take place in Fukuoka, Japan. In Fukuoka, the German Track and Field Association (DLV) will be represented by one single female athlete, Susanne Ritter.

The list is long of the competitions to which the DLV has sent few or no athletes to compete in the middle or long distance events—at both the World Championships and the Olympic Games—for whatever reasons. At the 2004 Cross-Country World Championships in Brussels, in neighbouring Belgium, Susanne Ritter was also the only female German participant, and last year in neighbouring France, only two German women (Susanne Ritter und Julia Viellehner) participated at the event in St. Galmier. There were no male or female German runners at all competing in the middle and long distance events at the Indoor World Championships in Moscow in 2006.
It is hard to comprehend or at all understand what policy stands behind the decision not to send German athletes to the most important events in track and field, to deny our young athletes the opportunity to compete against the world’s best and thus gain important experience competing.
Running in Germany will certainly not progress if it continues to simply be a spectator sport.
The USA also has experienced a somewhat longer dry spell with regard to middle and long distance running. Yet they did not answer with passivity, but rather have been continually giving their young athletes the chance to develop, even at risk of finishing at the very back at the major events.
In Germany, the motto seems to be: Nothing ventured, nothing gained. Nothing will be won in the future that way either.

Read the following interview about the strategy of the US Track and Field Association:

Mr. Martin, you have for many years been either an individual coach or a USA team leader or closely involved with development of USA running team athletes at the highest level competitions - including the Athens Olympics in 2004, at the World Championships in Helsinki in 2005, and now for the Cross-Country World Championships in Fukuoka/JPN * how long have you been playing such a role.?

Dr. Dave Martin: My first international trip as a team leader was World-Cross Country at Paris 1980 * Craig Virgin (USA) was the winner. I was also team leader for World Cross in 1987 at Warszawa and  in  1991 at Antwerpen. I was senior men’s team leader for 2000 World Cross at Vilamoura.
In 1985 I was USA team leader for the first IAAF Marathon World Cup at Hiroshima. In addition,  I was the personal coach/advisor of the only two American distance runners to win medals in the hot humid Asian summertime (Keith Brantly won gold at 10.000 m  in 1985 Kobe Universiade and Steve Spence won bronze at the marathon in the 1991 World Championships in Tokyo).

To what big events and for what disciplines does the USA Track and Field Association regularly send its athletes?

Dr. Dave Martin: Our policy is always to send full teams of athletes to IAAF competitions because 1) we desire to provide strong support to the world federation and 2) our athletes learn how to compete at the highest level by actually doing it.
One can easily coach training but it is much more difficult to coach the desire and the ability to compete -  that comes from within the athlete through experience

What do the athletes have to achieve in order to qualify? Does the USATF set higher standards that the IAAF?

Dr. Dave Martin: We typically go with the IAAF standards. Those are difficult enough!

Are you satisfied with the achievements of the US runners, both nationally and internationally?

Dr. Dave Martin: As long as they are trying to do their best, training hard, and staying healthy, we think they will continue to improve. And this is all we can ask.

The USA has always led in the distances from the sprint to the 400m, but the level for the mid and long distances had been regressing over the past years.  However, the USA won medals once again in the marathon at the Olympic Games in Athens in 2004.  What changes in the training or support had been made?

Dr. Dave Martin: We have started to focus on a team approach * Deena and Meb were part of a team of coaches, physiologists, nutritionists, etc. who all worked together to develop a best strategy for that  unique and very difficult competition.

You have some very big races in the USA (NYC, Chicago, Boulder, etc.) * but these races are mostly won by foreigners:

Dr. Dave Martin: The very best runners in the world come to compete, and they are in absolutely top condition. Our runners cannot remain in top condition all year around. And so they try to do their very best. Sometimes we DO win!

You always take very big teams to the events*with 6 teams of 6 runners to Brussels/BEL and St. Etienne/FRA for the Cross Country World Championships, to the Olympic Games in Athens and to the IAAF World Championships in Helsinki - even if that means risking that the athletes might come in last. Germany, on the other hand, usually only takes one or two athletes to events in the neighbouring countries (Belgium, France).
What do you think about this approach by the German federation?

Dr. Dave Martin: I cannot imagine why a Federation like Germany would not advantage of nearby good quality competition and send full teams.

Does it aid the athletes to have experience competing in international events, or do you think it is a good approach to only send the athletes if they have a good chance of making it to the finals?

Dr. Dave Martin: Competition is the life blood of sport. Whether you win or lose, it’s the participation that is important.

How many athletes will be flying to Fukuoka for the Cross-Country World Championships, and what do they have to do to qualify?

How do you expect your athletes to perform in Fukuoka ?

Dr. Dave Martin: Here again, we are competing against the best in the world. We are not bringing all of our best athletes because there are other world competitions that are interesting,
Deena Kastor runs in the Berlin HALF MARATHON, Jennifer Rhines runs in the Rome marathon,  Dathan Ritzenhein has a bad cold. So, we will bring the best we have.
We try hard, and what is most important is that our athletes get experience. For example in travelling to Fukuoka they can practice time zone acclimatization for Osaka 2007 and Beijing 2008.
The senior men (short course) has a  chance for a medal.

The interview was conducted by Horst Milde

PS: note:
Jorge Torres, Sara Hall and Ryan Hall qualified in New York City for the US team in Fukuoka, and first participated in the Indoor World Championships in Moscow before flying on to Japan where they then both won their events at the Chiba Cross (the qualifying race for the Japanese runners).

Dr. David E. Martin (67) Ph.D. (College of Health Sciences, Georgia State University, Atlanta/USA) is a professor and practicing psychologist. He has been a member of the US association for long distance running since 1972, is the chairman of the Cross-Country commission in Georgia, and is active in numerous national and international committees, including his capacity as a statistician for AIMS (Association of International Marathons and Road Races), at the IAAF, and in the NOC of the USA.

Dr. David Martin has made a name for himself in innumerable athletics commissions as well as in the area of sports medicine. Through his year-long studies at his institute at the Georgia State University, he has prepared athletes from around the world for their competitions, especially with respect to running conditions at great heat or altitude at the Olympic Games. He is also a well-known author (together with Roger Gynn) of two books which caused a sensation in the running world: “The Marathon Footrace” (1979) and “The Olympic Marathon” (2000) and together with  Peter N. Coe "Better Training for Distance Runners".

These few details should suffice in demonstrating that Dr. David Martin is a profound expert of international athletics and sports medicine, and that he knows what he is talking about.