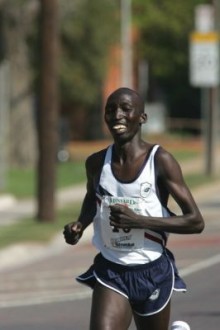 Chasing the world record Sammy Kipketer ran a blistering opening mile of 4:18 minutes. He then covered the second mile in another 4:18 and was well within the world record schedule. But his pace was a bit too fast. Additionally he was running at front alone. Abraham Chebii was about five metres back while Shadrock Kosgei was another five metres behind. When Sammy Kipketer then hit an uphill stretch he slowed and could not increase the pace again later in the race. In fine weather conditions the 5 k point was passed in 13:46 minutes. Chebii, who suffered of a slight cold, was two seconds behind, Kosgei followed another two seconds back. “I was running too fast at the beginning,” Sammy Kipketer said after the race.

The women’s race was won by Alvetina Ivanova (Russia) in a course record of 25:16. While Tatiana Chulakh (Russia) took second place in 26:17 Lyuvbov Denisova (Russia) was third with 26:27. Rebbi Koech (Kenya) took fourth place with 26:55.

Meanwhile Uganda’s Boniface Kiprop won the 10,000 m on the last day of the athletics events at the Commonwealth Games in Melbourne. He clocked 27:50,99 minutes. Geoffrey Kipngeno (Kenya/27:51,16) and Fabiano Joseph (Tanzania/27:51,99) took silver and bronze.