Paul Kosgei has a personal best of 59:58 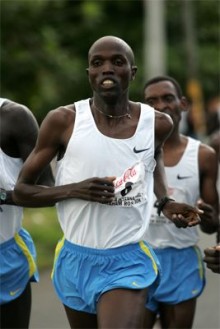 Paul Kosgei has a personal best of 59:58
© Victah Sailer

Kenya’s Top runner Paul Kosgei will run the 26th Vattenfall BERLIN HALF MARATHON on 2nd April. The 27 year-old was World Champion in this event four years ago. Organiser SCC-RUNNING expects a record participation of over 18,500 participants at the Vattenfall BERLIN HALF MARATHON. Among the runners are inline skaters, walkers, Nordic walkers, wheelchairs and handbikers.

„We are happy that we were able to commit him to our race, because Paul Kosgei is an absolute world-class runner,” explained Race Director Mark Milde, who had already signed the strongest women’s field in history of the Vattenfall BERLIN HALF MARATHON. Defending champion Luminita Zaituc (Germany) will race against Athens ’ marathon Olympic Bronze medallist Deena Kastor (USA), and three-time World Cross Country Champion Edith Masai (Kenya). Kastor and Masai both have a personal best of 67:53 minutes.

Paul Kosgei, who has a world class personal best of 59:58 minutes, had a big success in Berlin two years ago: He won the „25 k of Berlin“ in a world record time of 1:12:45 hours. Recently the Ethiopian Haile Gebrselassie ran faster, but it seems possible that Kosgei won’t loose his world record. Since Gebrselassie was probably paced illegally it is doubtful if his record will be approved.

The registration for the Vattenfall BERLIN HALF-MARATHON is closed since Friday; but there will be a possibility for further registration at the BERLIN VITAL spring expo, from March 30 to April 01, 2006.