Edith Masai of Kenya will be challenging Deena Kastor at the 26. Vattenfall BERLIN HALF MARATHON 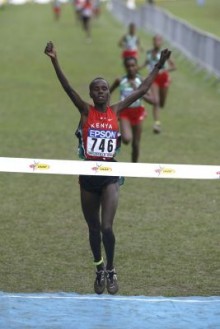 Edith Masai of Kenya will challenging Deena Kastor in Berlin at the 26. Vattenfall BERLIN HALF MARATHON
© Victah Sailer

There will be a big duel at the 26th Vattenfall BERLIN HALF MARATHON on April 2: after receiving the commitment from the Olympic marathon bronze medallist in Athens, Deena Kastor (USA), race director, Mark Milde, announced today that Edith Masai will also be competing in Germany’s largest half marathon. The 38-year-old woman from Kenya was the 4 km cross-country world champion e three years in a row (2002-2004), as well bronze medallist in the 5000m World Championship race in Paris in 2003. Last year, Edith Masai won her debut marathon in Hamburg with a time of 2:27:06.

On April 2, the Vattenfall BERLIN HALF MARATHON will thus have its most elite women’s field in its history.  In addition to the US record-holder Deena Kastor (personal best: 67:53) and Edith Masai, who also has the exactly identical time as the American, the current fastest German female half marathoner will also be in the field: Luminita Zaituc (LG Braunschweig) won in 2005 with a time of 71:04, but she hopes to be able to improve that time this year. “We are looking forward to an exciting and top class women’s race. We have never had such a promising constellation at the Vattenfall BERLIN HALF MARATHON,” stated race director, Mark Milde.

Registration deadline is Friday: about 18,500 participants are expected

Like last year, about 18,500 runners, inline skaters, walkers, Nordic walkers, wheelchair competitors, and hand cyclists are expected at the Vattenfall BERLIN HALF MARATHON. Whoever would still like to sign up better hurry, as the registration deadline for the 21.075 km race is today, Friday, March 17.

The best way to register is online at:
www.berliner-halbmarathon.de.
Information is also available at the SCC-RUNNING office, which can be reached at tel.:
030 – 3012 8810.