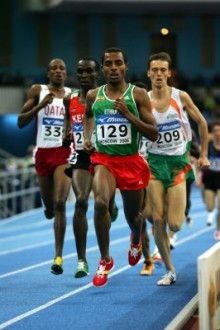 In this 3,000 m final there will also be the fastest Kenyan track distance runner, Eliud Kipchoge, who won his prelim in 7:52.57 minutes slightly ahead of Kenenisa Bekele’s brother, Tariku. Third was Shaheen in 7:52.85 minutes. In fourth place finished the Irish Ian Alistair Cragg, an athlete who beat Kenenisa Bekele during last year’s indoor season. „I think the Bekele brothers will be working together,“ said Shaheen, while Kenenisa Bekele explained: „The best of the world will be in the final – I think Shaheen and Kipchoge are my toughest competitors. It won’t be about the time, it will be about medals.”

Olympic Champion Yuri Borzakovskiy started his home match with a prelim victory in 1:48.08 minutes. The hardest competitor of the Russian is probably the Kenyan Wilfred Bungei, who also qualified easily for the next round on Saturday. Defending Champion Mbulaeni Mulaudzi (South Africa) won his prelim and will start in the semi finals as well. In the 1,500 m final the European Indoor Champion of 2005, Ivan Heshko (Ukraine), will try to surprise Kenyan Daniel Kipchirchir Komen on Saturday.