AIMS will sponsor two children’s races in developing nations in Africa and also a race in Nepal. 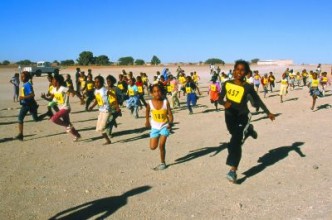 AIMS (The Association of International Marathons and Road Races) is to help the African continent find its next Tulu, Dinsamo, Loroupe, Thugwane and Tergat, to name a few of the world’s greatest distance runners, and to keep healthy.

AIMS will sponsor two children’s races in developing nations in Africa and also a race in Nepal. These will be held in conjunction with the:

AIMS World President Hiroaki Chosa comments: ‘Africa has given the world so many great athletes. Many of these athletes have emerged against incredible adversity. Sport, and running in particular, offers an inexpensive way of raising self-esteem and helping to develop and maintain good health. By way of these races in Africa and Nepal we are seeking to encourage more young children to follow their dreams and to aim for a healthy life.’

AIMS (The Association of International Marathons and Road Races) is the World body representing road races from every continent, spreading across over 200 races in over 80 countries.

AIMS started its programme of support for children’s running events in Africa in 2000, when it sponsored children’s races in Arusha, Tanzania in conjunction with the Mount Meru Marathon.

AIMS is also a supporter of global children’s charity UNICEF.

Former London Marathon winner and AIMS General Secretary Hugh Jones comments: ‘I have run in Africa several times and also competed against some great African athletes. African runners have frequently emerged despite formidable social, health and economic barriers. Both in Africa and in Nepal we want to do what we can to improve people’s access to opportunities that we frequently take for granted in the wealthier countries of the world.’

AIMS recognises that there are great differences and inequalities across the world economically, culturally and socially.  These frequently lead to a lack of opportunity, poor fitness and health.

As a global organisation ‘fostering and promoting road running’ AIMS looks to encourage and promote fitness and health benefits for young people.
AIMS seeks where it can to create opportunity for young people to develop an interest in road running, build self esteem and appreciate the importance of maintaining their health through participation in the sport of running.

AIMS will be supplying T-shirts and medals to all children who participate in the races and will also contribute to a prize list for the top finishers in each age category split equally between boys and girls.