A Double for Antje Möldner at German Indoors in Karlsruhe

The quality of the running events at these championships was low key. 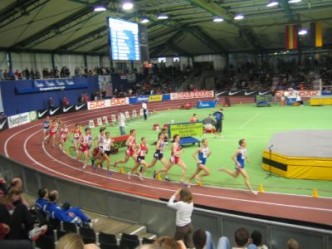 A runner was the only athlete who managed a double at the German indoor championships in Karlsruhe during the past weekend: Antje Möldner won the 1,500 m and the 3,000 m. First she clocked 9:14,69 minutes on Saturday, then she ran 4:29,13 minutes a day later. But the quality of the running events at these championships was low key.

In the 3,000 m neither Irina Mikitenko nor Sabrina Mockenhaupt was competing. So there was no danger for Antje Möldner in both events. She relied on her finishing kick – and that worked fine. “For parts of the race the 1,500 metres were not faster than the 3,000 metres the day before”, Antje Möldner said.

Quality of the 800 m races was hardly any better. Kerstin Werner took the women’s title with  2:08,06 while René Herms celebrated his fifth straight win in this event. He clocked 1:48,34. It was slightly better in the 1,500 m. Stefan Eberhardt won this event with 3:42.24. While he will compete at the World Indoor Championships at the end of next week Jan Fitschen decided to concentrate on training fort he summer season. Fitschen won the 3,000 m in convincing style, clocking 7:53.14 minutes.