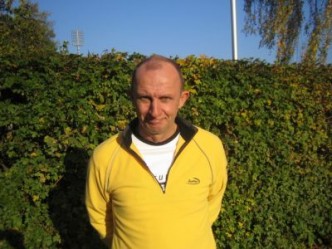 John Kunkeler - Music and running are his specialties – starting again in March, he will be showing runners Berlin by night.
© hme

As so often, John Kunkeler is responsible for another new insider tip for the running scene.
John Kunkeler is not only the head of the RBB Running Movement (every Saturday at 2 p.m. at the Siegessäule (Victory Column) in Hofjägerallee in the Tiergarten Park), but he is also responsible for determining and surveying the new courses for the real,- BERLIN MARATHON and the Vattenfall BERLIN HALF MARATHON and is untiring and innovative in his many other activities for the sport of running in Berlin.

A success since October 2005

Last October, he started a new and successful running option for night-running enthusiasts:
Night Run Training, every Tuesday, meeting point at 10:30 p.m. at the
Edison Courtyards in front of the jazz club "Kunstfabrik-Schlot" (with a large parking lot) at Invalidenstrasse 117 in Berlin-Mitte.

The run goes for about one hour along a well-lighted course. The slowest runner determines the pace. One’s perception is different in the dark — it seems easier!

Condition: If it is raining at 10 p.m., the run is cancelled!

As agreed upon, due to the unfavourable weather in the last few weeks, lately the night running has not taken place.
Starting at 10:30 p.m. on March 7, 2006, the weekly night run will continue.

Musical activities at the real,- BERLIN-MARATHON

The numerous musical activities with approximately 60 bands and choirs along the course of the real,- BERLIN MARATHON are primarily due to his efforts. It is not without cause that he (together with Stefan Berker) runs the jazz club "Kunstfabrik Schlot", where much of the music is at home.
Both men are marathon runners, and together they are the fastest marathon pair from one jazz club, worldwide. It is thus understandable that John Kunkeler’s newest initiative is a night run he leads, starting out from his jazz club.

The jazz club "Kunstfabrik Schlot" has developed over the past few years into one popular address for the running scene, due to marathon runners John Kunkeler and Stefan Berker and to Kunkeler’s many activities with SCC-RUNNING.  The club has often been a meeting point for the RBB Running Movement, and "RUNNERS WORLD" has invited numerous guests from the running world for an annual evening meeting during the BERLIN MARATHON at the club.
Cabaret, close-up comedy, jazz, and running seem to have come together in a successful mix here. The 16th Literature Marathon also took place there during the 32nd real,- BERLIN- MARATHON 2005.
On Sunday, March 12, 2006, the RBB-Running Movement will meet again at “Schlot” to discuss activities for the running year 2006.