Tiergarten Park - starting point of the real,- BERLIN-MARATHON and for many other races 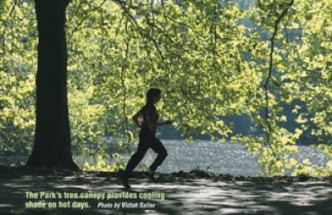 Tiergarten Park - space for runners and cyclists for training - near by the starting point of the real,- BERLIN-MARATHON
© Sailer

The Brandenburg Gate and the Potsdamer Platz are situated on its eastern border, which was once the frontier between East and West Berlin. In the early 18th century, Peter Joseph Lenne designed ornate landscape gardens to include winding paths, lakes, bridges, sculptures and flowerbeds. Prior to 1942, the Tiergarten was known as a hunting reserve for Prussian kings; however, during the Second World War many of the trees were cut for firewood and the pristine lawns were turned into vegetable gardens.

The splashing of ducks in the ponds ...

Tiergarten now stands as a serene city park covering over 630 acres and is conveniently accessible by bus and underground train. Visitors often read a book, eat lunch or sunbathe in the large open areas. The loudest sounds come from the crunching gravel under cyclists' wheels, the peals of laughter from young children in the playgrounds, and the splashing of ducks in the ponds.

Suitable for both runners and cyclists

The park offers a variety of level terrain, including gravel trails & soft dirt mixed with flattened leaves suitable for both runners and cyclists. The expanse of umbrella-like trees provides consistent and welcome shade during the warmer months. In the center of the park sits.

The World Culture Center, nicknamed the pregnant oyster due to its design. Nearby is the Tall Victory Column, towering 226 feet high and offering incredible views across the city. Theme exhibits and festivals take place here and according to former real,- BERLIN-MARATHON race director and founder, Horst Milde, prior to 1981 the marathon started in the forest, similar to races in Central Park.

Thereafter, the real,- BERLIN-MARATHON started at the Tiergarten. Many other races also use the garden as a starting point or the "Straße des 17. Juni", near by the famous Brandenburg Gate.

There is nothing more inviting than to end your day at the cafe and beer garden located on the shore of the lake in the southwest section. You can dine at the picnic tables or the deck that overhangs the water. For more information on running or touring in Berlin, go to www.berlin-marathon.com and