The IAAF has set relatively moderate qualifying times for the marathon, with 2:18 for the men and 2:42 for the women 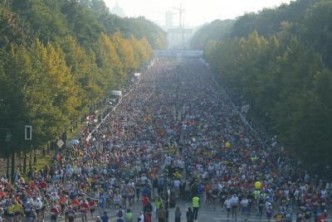 One can only qualify in Berlin for the IAAF World Championships in Osaka in 2007...
© SCC-RUNNING

Gordon Rogers (CAN), technical director of AIMS (Association of International Marathons and Road Races) and also involved with the IAAF, recently announced the races which are valid as “qualifiers” for the IAAF World Championships in Osaka (JPN) in 2007. Runners wishing to be nominated to represent their countries in the marathon race in Osaka in 2007 can only run their qualifying times on these selected courses.

While Germany has numerous large and fast marathon events, athletes can (currently) only qualify for Osaka in 2007 on September 24, 2006 at the real,- BERLIN MARATHON.
In Austria, the Vienna and Graz Marathons are the selected courses, while in Switzerland the courses are the Lausanne and Zurich Marathons.
Only in the USA is it possible for runners to qualify at one of 27 marathon events, and in Poland at one of twelve.

The rest of the qualifier courses can be found at:
www.iaaf.org

The races in Berlin, Boston, Chicago, London and New York City have a special status with the IAAF, allowing the first 20 (men and women) to receive the A-standard and thus automatically achieve qualification.

The IAAF has set relatively moderate qualifying times for the marathon (also for the German men!) for Osaka in 2007, with 2:18 for the men and 2:42 for the women.