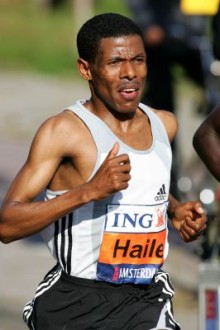 Competing on a cool, crisp day - ideal for distance running - the diminutive Ethiopian shattered World records in the half-marathon and 20K. Overcoming a relatively slow start by his three pacesetters, Gebrselassie was sensational after he set out on his own between the 7K and 8K marks and blazed the final two-thirds of the half marathon course on his own, finishing in 58:55. His time clipped 21 seconds off the previous record of 59:16 set by Kenyan teenager Samuel Wanjiru at Rotterdam, Netherlands, on 11 September 2005. Gebrselassie had passed the 20 k mark in 55:48 minutes.