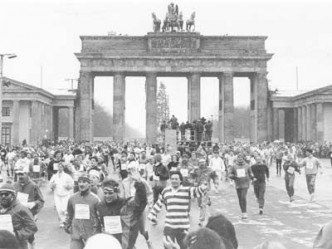 The running year began in Berlin at noon on January 1, 2006 with the traditional New Year’s Day Run at the Brandenburg Gate. This non-competitive event has now become an institution that is an integral part of the sporting life of Berlin. It also demonstrates the unique Berlin situation, where what used to be an East Berlin race has now become a race for everyone together after the fall of the Wall on November 9, 1989.

Heinz Florian Oertel was the most famous sport reporter in East Germany. The now 78-year-old worked for decades for the Berliner Rundfunk radio station and for GDR television. Heinz Florian Oertel reported at the Olympic Games and numerous world championships.
He made one legendary statement during his coverage of the Olympic marathon race in 1980 in Moscow: “Men, fathers—be courageous: Name your newborn sons Waldemar today.”
For the second time in a row, Waldemar Cierpinski had won the Olympic marathon in Moscow in 1980, thus writing sporting history.  Oertel was famous and popular due to his strong and stirring rhetoric.

1972 in the Berlin district of Friedrichshain

Heinz Florian Oertel initiated the tradition of the Berlin New Year’s Day in 1972. Oertel hoped to organise a race for the general public, rather than just for elite runners, after the model of the New Year’s Eve race in Sao Paulo. “The race was not about rankings and times, but about the joy of running,” Oertel explained.  The race always took place in Friedrichshain.

The day after the Wall came down

The traditional Teufelsberg Cross Country Race took place on November 12, 1989, and for the first time, East German runners were able to participate. On the same day, the East German runners Roland Winkler, Dr. Detlef Dalk, and Gerd Engel gathered together in Horst Milde’s apartment and agreed to each write to their own city mayors, Erhard Krack (East Berlin) and Walter Momper (West Berlin) to tell them that on January 1, 1990 there ought to be a New Year’s Day Run through the Brandenburg Gate and that the 17th Berlin Marathon ought to lead through both parts of the city on September 30, 1990. Both letters were on the mayors’ desks on November 14th.

One could fill books ...

One could fill books on the negotiations that Horst Milde held with the East German officers and generals of the border squads over the course of the last five weeks until the New Year’s Day Run on January 1, 1990, in order to be able to have the run lead through the Brandenburg Gate. At first they demanded that each runner be registered in writing, that each runner would get a stamp from the border patrols, and that foreigners could only cross at Checkpoint Charlie, to name just a few of the issues.
Stefan Senkel was the contact person for the issues regarding track and field in East Berlin. Together with the East Berlin track and field association, Stefan Senkel organised the course of the event in East Berlin.

A shortened version for 25,000 participants

The course of the New Year’s Day Run was not the one suggested by Michael Coleman from the Olympic Stadium to Alexanderplatz, but rather a shorter version from Entlastungsstraße to the East Berlin Red City Hall around the TV Tower and back, 6 kilometres that were to become a great running event.
25,000 participants from around the world did not want to miss the opportunity to take part in an event that would never be repeated at such a scale.
At 2 p.m., the city mayors, Walter Momper (West) and Erhard Krack (East), together sounded the starting shot of this memorable event. Journalists from around the world reported live on this special event.

Even the then-president of the IAAF, Primo Nebiolo, travelled from Rome to give a statement at the press conference following the race at the House of World Cultures.
In 1990, a New Year’s Day Run also took place that morning in the district of Friedrichshain – but the New Year’s Day Run at the Brandenburg Gate continued on in 1991. The sensational participation from 1990 was never achieved again, however.
The run in Friedrichshain was eventually given up for the more attractive race through the city centre. Heinz Florian Oertel used to be the moderator for the New Year’s Day Run at the Brandenburg Gate, when his health permitted.

It is also tradition to have the district mayor of Mitte-Tiergarten ring out the starting shot at noon. The president of the German Bundestag has also come out in the past on New Year’s Day to send the runners out on the 4-km course. Slow pace makers lead the way with flags to assure that the run does not become competitive, but rather proceeds at an easy pace for everyone, including walkers, wheelchairs, parents with kids, and moms with joggers.  Numerous celebrities have participated; a few years ago the German foreign minister, Joschka Fischer, joined in unnoticed.

The streets are kept clear with the assistance of the Berlin police. There is no registration fee, but a donation is collected from each runner for the UNICEF Children’s Fund. Many journalists are also there to report on the first sporting event of the year.
The race is over after 45 minutes - numerous tourists cheer them on after a night of New Year’s celebrating.

The participants receive a nice certificate signed by race director Mark Milde – and Heinz Florian Oertel, the initiator of the New Year’s Day Run in 1972. The event always closes with a reception by the organiser for friends, celebrities, politicians, sponsors, and SCC-RUNNING volunteers in the facilities of the Commerzbank, located directly next to the Brandenburg Gate.

For the joy of it

It is the joy of running, as Heinz Florian Oertel stated in 1972 at the premiere in Friedrichshain, that brings all of the runners together on that day and place to demonstrate the enjoyment of their common sport.