Already more than 3,000 registrations for the Vattenfall BERLIN HALF MARATHON 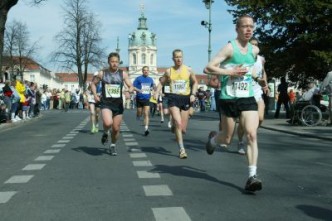 On 2nd April the Vattenfall BERLIN HALF MARATHON will be the big international start to the new running season. So far there are more than 3,000 registrations for race which is the eighth biggest in the world at the 21.0975 k distance. This is slightly above than last year’s mark at this time. Among the 18,331 athletes from 69 nations in 2005 were runners, skaters, walkers, wheelchair athletes, handbikers, the participants of the Fun-Run as well as the kids of the Bambini Race.

In recent years the race developed to a real counterpart of the real,- BERLIN-MARATHON. Additionally the number of spectators grows. Around 150,000 people, as many as never before, watched the race. So the Vattenfall BERLIN HALF MARATHON is Berlin’s spring running highlight.

The Vattenfall BERLIN HALF MARATHON offers big quality as well. Above all is the very attractive course. No other running event in Berlin boosts so many sights along the course. The start is on the boulevard Unter den Linden right before the crossing of Friedrichstraße. In the first kilometre the Brandenburg Gate is passed, followed by the victory column, Charlottenburg Palace, Kaiser Wilhelm Memorial Church, te department store KaDeWe, Checkpoint Charlie, Berlin City Hall, TV tower and last but not least the Berlin Cathedral. Then the participants reach the finish at the Schloßbrücke. A sightseeing tour could barely have more sights in its program.

But he course is not only attractive, it is flat and fast as well. Already twice the European half marathon record was broken in Berlin. Not only top runners benefit from this ideal course, also the average runner benefits from it. For them the Vattenfall BERLIN HALF MARATHON is the ideal terrain for a personal best or for a last test for one of the big spring marathon races in April: Hamburg, London or Boston for example.

Also the programme was enhanced steadily during the past years. Central aspect of it is the sports expo BERLIN VITAL.