The Mountain Race that became a New Year’s Eve Race, and finally a “Jelly-Donut” Race

The winners once received cakes — now there are donuts for everyone 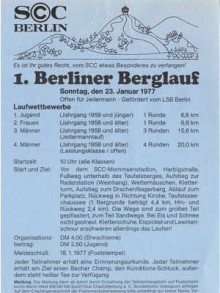 Posting of the 1st Berlin Mountain Run in January 1977 – which was cancelled due to ice!
© hme

There were two running anniversaries in Berlin on December 31, 2005 and January 1, 2006 that are part of the standard programme for many Berlin runners. The Berlin New Year’s Eve Run at / around / over the Teufelsberg mountain was carried out for the 30th time, while a day later the 35th Berlin New Year’s Day Run took place. Both races have their own stories and their own flair. While one run takes place in open nature in the Grunewald Forest and over the Teufelsberg (a 118m-high “mountain“ built from the debris from World War II), which is an ideal training ground for runners, the New Year’s Day Run takes place in the city centre – at the Brandenburg Gate and down the grand boulevard Unter den Linden.

The Berlin New Year’s Eve Run celebrated its 30th anniversary on Saturday. SCC originally did not at all plan for this event to be a New Year’s Eve race.
The then-chair of the SCC track and field department, Horst Milde, and the long-distance trainer, Heinz Uth, wanted to offer the numerous middle and long-distance runners in their club a difficult challenge for both training and competition.
It was to be a race that provided an athletic challenge and supported their winter training, for at the time there were 48 marathon runners in the club with times under 3:30.

The 1st Berlin Mountain Run was to take place on Sunday, January 23, 1977, with three different courses - 20 km, 15.6 km, and 6.8 km (for women) - over Teufelsberg Mountain (ca. 118 m high). The prophetic text of the invitation read: “The paths will not be cleared in case of ice and snow. Climbing boots, ice picks, and avalanche cords will make running more difficult, however.”

One probably could have used climbing boots and ice picks, for when the organisers arrived at 10 a.m. on January 23, 1977 to start the race on the parking lot in front of Mommsen Stadium, the streets and paths were covered with a thick layer of ice - everyone who tried to run quickly landed on the ground.  The race was cancelled completely and rescheduled for 3 p.m. on March 12, 1977.

It was dry with almost spring-like temperatures of 12° C on that Saturday. 180 participants showed up. The winner of the 20 km race was Inge Simonsen, a Norwegian studying in Berlin, who finished in 1:04:04 ahead of Mathias Einert (also of SCC) who had a time of 1:07:29.
Inge Simonsen later became a very interesting and successful runner, winning the 1st London Marathon together with Dick Beardsley (with identical times) in 1981.
Horst Schuller-Lenz (no club affiliation) won the 15.6 km race, while Anegret Menge (SCC) won the 6.8 km women’s race in 30:36.0.

The winners each received a cake

As the feedback from the race was so good, the 2nd Berlin Mountain Run was organised for the same year, on December 31, 1977  - but already the nickname “New Year’s Eve Run” was added in parentheses. The first thirty runners received jelly-filled donuts, while the last ones received PICKLED HERRING! The champions received entire cakes.
Inge Simonsen also won the 2nd Berlin Mountain Run in 1:05:24 on December 31, 1977, ahead of  Mathias Einert and Claus Rathjen (NSF). 350 participants faced the challenge. Strong winds (windspeed scale 8) were blowing, which made it very difficult to forge ahead or improve the times from the past March. Hans-Dieter Richter and Fritz Orlowski ("Bubi") had the hard task of getting the course in good enough shape to run, a job still difficult today. Nothing is ever “normal” on a New Year’s Eve course!

The New Year’s Eve Run was then renamed the “Jelly-Donut Run,” as the event organiser Horst Milde did, after all, run a bakery in Berlin-Tempelhof. But now EVERY participant received a donut at the finish - the sweet Berlin specialty filled with plum jam and covered with powdered sugar.  Some runners, however, were surprised with one of a few donuts filled instead with mustard!

Sometimes the race was started with a firecracker, but they often did not work in the snow or rain.  And frequently those who were the first to make it to the top of the kite-flying mountain to the American forces radar station would receive a bottle of sparkling wine as a prize at the finish.

There was always winter weather

On December 31, 1978, there were snow flurries with 20 cm of new snow, a temperature of 18° C below zero, and strong winds  - but the race went on anyway.
Those runners with beards crossed the finish with long icicles hanging from their faces - photos of which covered the front pages of the Berlin papers the next day. In 1981 it poured all day, but that did not stop anyone from participating in the race.

Berlin’s former mayor, Eberhard Diepgen, participated in the New Year’s Eve Run several times, and he always chose the longest course—and after the race he always celebrated with a few drinks with his training partners and body guards.

Changes in the starting times and course distances

The starting time was moved up from 2 p.m. to noon, and for the past several years there has been a costume competition before the race with more and more runners participating.
Participation has grown from the original 180 runners in 1977 to an average now of 1,700 to 2,000 runners - more would not fit on the narrow paths before / on / and next to Teufelsberg Mountain.

The course distances have been reduced from the once 20 km and 15.6 km to just short of 10 kilometres for the longest race - but the donuts for everyone at the finish remain a constant (as well as the pickled herring for the LAST ones).

Once again this year, Teufelsberg Mountain was covered in snow, so a less dangerous alternative route was taken - and once again over 1,700 runners participated.  The costume competition took place before the race, as usual. One runner who came extra all the way from Holland won the 4 km race - and got third place in the costume competition for his outfit of shorts and short-sleeved shirt despite the ice and snow.

Both of the SCC-RUNNING races at the turn of the year have become an attraction for tourists - one can celebrate the New Year in Berlin and also participate in two attractive races.