“It was a good start for the running year 2006. We are confident that 2006 will be a successful as the past year said race director Mark Milde 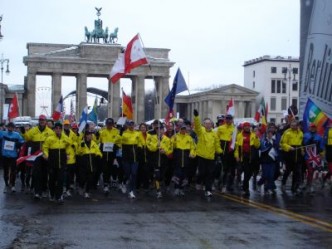 4,010 runners participated in Germany’s largest New Year’s Day race at noon today at the Brandenburg Gate. Some in costumes, the runners enjoyed a 4 km course that lead down and back the boulevard Unter den Linden. The district mayor of Berlin Mitte-Tiergarten, Joachim Zeller, gave the starting shot for the 35th Berlin New Year’s Day Run, and then joined in himself. “I’m happy that so many runners have come together again to welcome in the new year in such an athletic way,“ Joachim Zeller said.

Non-competitive event with no timekeeping

Also among the runners were the Berlin secretary of sport, Thomas Härtel, and Werner Sonne from the ARD capital television studio, who ran with his son. Many children and even some dogs ran the 4 km course. As is tradition, the Berlin New Year’s Day Run is a non-competitive event with no timekeeping. In lieu of a registration fee, SCC-RUNNING collected donations for the UNICEF Children’s Fund, as it has in the past. Over 6,000 Euros were collected during this charity run. The money will be used to aid children in Pakistan.

“It was a good start for the running year 2006. We are confident that 2006 will be a successful as the past year,” said SCC-RUNNING race director Mark Milde. The managing director of SCC-RUNNING, Rüdiger Otto, added: “2006 is rightly the year of the Football World Championships. Berlin will be the focus of attention, and that is even more reason to offer attractive running events here once again.”

Since SCC-RUNNING began with events for the general public in 1964, there have been a total of 387 events with 1,537,936 participants.